According to Pacifica’s interior details page of the Chrysler website, the minivan comes standard with stow-and-go seats. What sets the Pacifica apart is that there are stow-and-go seats in both the second and third row of the van. This feature allows you to change your three-row minivan into essentially the same level of cargo capacity as a truck bed.

Another great feature of Pacifica’s stow-and-go seating is added storage space. When the seats are in the upward position for passenger use, the floor compartments that they fold into are vacant. These compartments can be used as extra storage for small or medium-sized items. Regardless of which mode the seats are in, up or down, the Chrysler Pacifica is maximizing storage capabilities.

The fold-away seats that you find in the back of Chrysler Pacificas are a patented type of seating. This seating type is cleverly called Stow ‘N Go seating. The feature functions smoothly and works with a combination of automated systems and manual adjustments. You’ll have to fold the second row down yourself, but the third row goes down at the press of a button as long as you have adjusted small items like the headrests so that they will fit into the floor compartments.

If you are more of a visual person, here is a quick video demonstrating how the Stow ‘N Go seats on the Chrysler Pacifica work:

There are four total trims of the 2021 Chrysler Pacifica: Touring, Touring L, Limited AWD, and Pinnacle AWD. The trims are all similar in terms of size, shape, and most features. Both the Touring and the Touring L are available in AWD or FWD, whereas the Limited and the Pinnacle are AWD exclusively.

All trims have the same engine; there is a slight fuel economy decrease for the AWD versions and trims. Between the Touring and the Touring L, the L adds several features. Among those additions are 17-inch wheels, exterior chrome accents, leather accents for the interior, and driver memory for seat and steering wheel position.

Pacifica Limited adds features like premium leather seats and hands-free liftgate and sliding doors. The highest trim of the Pacifica differentiates itself with even more premium features. You can check out a complete list of the differences here.

How to Use Store and Go Seats in a Chrysler Pacifica 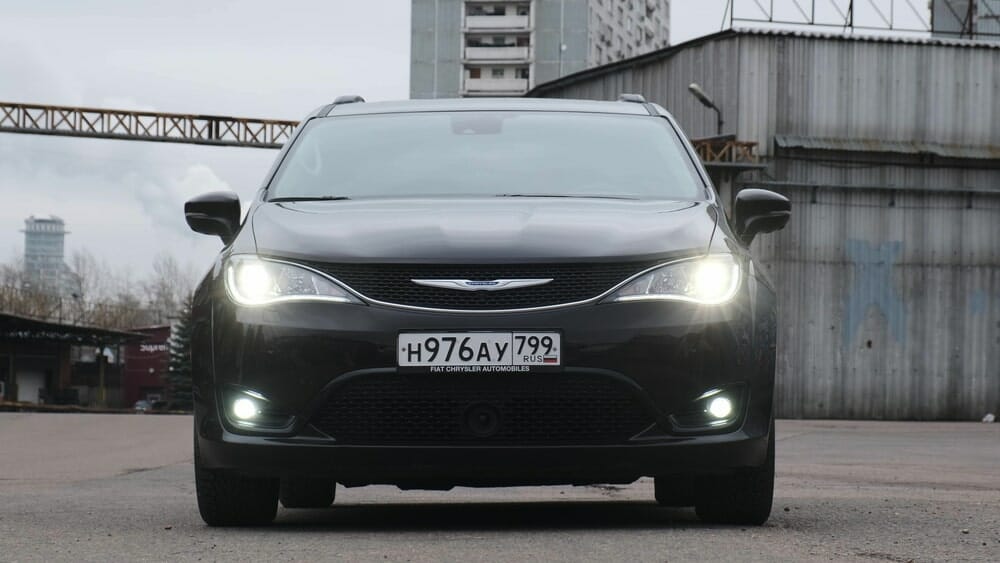 Using the stow-and-go seats in your Chrysler Pacifica is easy. Here’s how:

Do all Chrysler Minivans Have Stow and Go Seating?

First, the Chrysler Pacifica Hybrid is the environmentally friendly version of the standard Pacifica that Chrysler markets separately. Despite the different engine setup, the rest of the Hybrid is similar to the standard version. For example, the Pacifica Hybrid has standard stow-and-go seating, but only in the third row. While some of the Pacifica models we’ve covered have second-and third-row stow-and-go seats, the Hybrid does not. Second-row “Stow ‘N Go” seats are available by an upgrade.

Next, the Chrysler Voyager is another minivan model from the lineup. The Chrysler Voyager is also a seven-passenger minivan with stow-and-go seating available for the second and third rows. It is the same Stow ‘N Go-style pack away seats as the ones you can find on the Pacifica. They even have extra floor compartments that can be used when the seats are in the upward position.

Do any Other Minivans Besides Pacifica have Stow and Go Seating?

We now know that other Chrysler minivans other than the Pacifica have stow-and-go seating, but what about other minivans outside the Chrysler fleet? According to the Competitive Compare page of the Chrysler website, they are a cut above the competition.

Out of four minivans similar to the Chrysler Pacifica, it is the only model with both second and third-row stow-and-go seats. Competitors like the Kia Sedona, Toyota Sienna, and Honda Odyssey only have third-row fold-away seats.

In addition to being space efficient, a minivan should also be fuel efficient. The Pacifica Limited we tested delivered an impressive 31 mpg on our 75-mph highway fuel-economy route—that’s tops for minivans. According to the EPA, the Pacifica hybrid can travel up to 33 miles on electric power and is rated at 84 MPGe combined. Around town, we were easily able to match the EPA’s 33-mile estimate. On the highway, the Pacifica hybrid managed 23.4 miles of electric-only driving before the gasoline engine kicked on. While we haven’t had the opportunity to test the new all-wheel-drive model, we expect to update this review with test results soon. For more information about the Pacifica’s fuel economy, visit the EPA’s website.

Pacifica Pinnacle is one of the safest rides on the road

Safety is a priority no matter who you’ve got in your vehicle. Pacifica Pinnacle has More Standard Safety and Security Features than Any Vehicle in the Industry. Our safety innovations build your confidence and make you feel better about getting behind the wheel. Driver-assist features include:

These are just a handful of the many ways Chrysler works to keep you and the people you love most safe when traveling. Be sure to talk with your sales team member about all the safety features available. This is a lifesaving conversation you don’t want to miss!

The Pacifica is the Most Technologically Advanced Minivan in Its Class, so rest assured you’ll stay connected on the go. Our Uconnect 5 System features 19 available widgets that allow for customizing content with up to five user profiles. It also provides you with the smartphone connection you need to stay in touch.

Turn your Pacifica Pinnacle into a 4G LTE Wi-Fi Hotspot and connect up to eight devices simultaneously. Your passengers will appreciate streaming, downloading, and sharing, no matter where the adventure takes you.

Stow and go seating is available in the Chrysler Pacifica. This type of seating allows for easy storage and accessibility. Although they may be more expensive, they offer many benefits for families.

Stow-and-go seating is a great option for families who need a versatile and practical vehicle. While there are some disadvantages, the benefits far outweigh them. Be sure to consider them when making your next vehicle purchase.